Learn more about what's going on in our world 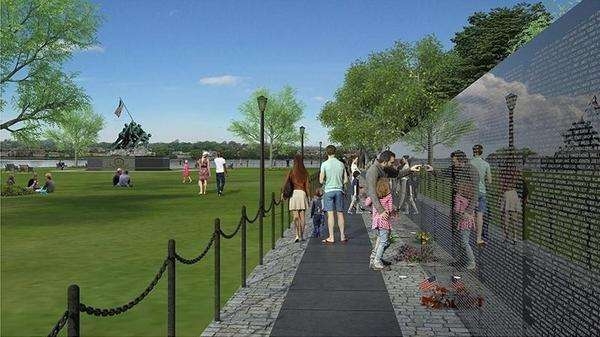 FALL RIVER — The construction of the Vietnam Veterans Memorial Wall in Bicentennial Park is on track to start in mid-May and will likely be ready before a targeted Veterans Day deadline.

Despite the fact that the Vietnam Veterans Memorial Wall Committee is unable to meet in person due to constraints of the coronavirus outbreak, chairman Joseph Marshall said the facilities committee met remotely, led by William Starck Architects, the project's clerk-of-the-works, two weeks ago.

The committee chose the vendors who will assemble the 140 aluminum panels engraved with the names of fallen Vietnam soldiers, and install lighting and landscaping.

"After Starck vetted the vendors, we had about a 45-minute teleconference call with them and made our recommendations to the full committee," said Marshall. "I'll tell you, everybody is so committed to this."

Construction is scheduled to begin the second week in May and just in time for state funding before the 2020 fiscal year ends June 30.  Last December, Massachusetts Gov. Charlie Baker and Lt. Gov. Karyn Polito announced the project was being awarded a $450,000 state grant and the state legislature, through the Department of Veterans' Services, was also appropriating $150,000 to the cause.

The $450,000 grant is funded through the Gateway City Parks Program, The Fall River City Council approved an appropriation of $300,000 in September 2018, and the infusion of money brought the fundraising effort to a total of $1.4 million.  "I would say it could be completed by the end of summer," Marshall said of the wall.

The official groundbreaking at Bicentennial Park in July 2019 drew state officials and Gold Star families of soldiers who died in the Vietnam War.  The project will be the region's only permanent replica of the Vietnam War Memorial in Washington, D.C. In October, the American Veterans Traveling Tribute of Texas delivered the panels from Minnesota, where they were framed. The panels, in storage at State Pier, were manufactured in Tyler, Texas, as part of what will be a 360-foot-long memorial, an 80% scale replica of the wall in the nation's capital. The panels will hang on a concrete wall that tapers down to a little more than 2 feet tall, like the original memorial.

InSite Engineering  is very excited to see this project come to fruition. We are happy to assist William Starck Architects in bringing the Vietnam Veterans Memorial Wall replica to Fall River Bicentennial Park.